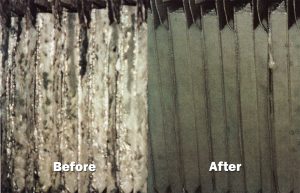 Aeration distinctly improves BOD and ammonia removal capacities of RBC (Rotating Biological Contactor) plants and the SideCar Aerator is the most convenient and inexpensive device to accomplish this RBC performance upgrade. SideCar is a specially designed, simple-to-install RBC air diffuser system that allows easy placement and removal with the RBC in position; there are no underwater attachments or anchors.

The most enthusiastic proponents of RBC aeration are plant operators and engineers who have witnessed the “before and after” of SideCar retrofits. Few modifications produce such measurable improvement in wastewater treatment so rapidly for such moderate cost.

HOW AND WHY SIDECAR RBC AERATION IS SO EFFECTIVE

Comparison of aerated biomass with that of non-aerated RBCs is striking. Aerated biomass has uniform color and thickness. Unaerated biomass is often thick, shaggy, discolored, and blotchy. Quite simply, aerated RBC performance is maximized by assuring the most favorable conditions for the “bugs” that do the job in wastewater treatment.

An obvious purpose-but certainly not the only function –of diffused air is to provide additional dissolved oxygen in the wastewater. Coincidental scrubbing action, as coarse bubbles gush into and through media passages, abrades and dislodges all but a thin layer of select, very active biomass. The passages of the rotating media create near-ideal turbulent conditions for mixing and transferring oxygen to the liquid and biomass.

Experience in scores of installations confirms that biomass over about 0.020″ thick becomes counterproductive. Oxygen cannot penetrate the greater depths of uncontrolled biomass growth. Subjacent layers become anoxic or anaerobic, competing and interfering with the favorable aerobic organisms and releasing products of respiration contributing to beggiatoa (white) and other nuisance organisms. Under these adversities biological treatment is impaired and, in most cases, resulting biological floc sloughed from the RBC is difficult to settle, hence effluent quality suffers further from poor solids capture in the secondary clarifier. Effective RBC aeration will correct and preclude this undesirable condition.

Accordingly, criteria for designing SideCar systems dictates that adequate continuous air flow be applied by the SideCar diffusers situated in close proximity (just inches) to the descending side of the RBC media.  With these conditions met collateral advantages of increased dissolved oxygen and mixing will be realized.

While problems of and associated with thick biomass can be expected at RBC plants with system or stage SBOD (Soluble BOD) overload, there are a surprising number of well designed plants operating at or below design conditions that experience treatment problems. Whether from presence of high SBOD, sulfur compounds, or in-plant returns, aeration has the same beneficial effects.

And studies show that aeration enhances nitrification by more efficiently reducing SBOD in the leading stages and effecting higher dissolved oxygen in the latter states of RBCs.

So RBC aeration acts in several related beneficial ways: Physically, by scouring off excess biomass and improved mixing; chemically, by increasing dissolved oxygen; and biologically, by optimizing the environment of the biomass that removes BOD and ammonia.